We have dedicated and professional coaches that have a track record of producing players in all age groups and from national, European, International & professional levels. Players in the programme progress through our coaching team as they reach the appropriate levels, this ensures that players are working with coaches who have the relevant experience for players to achieve the next level. 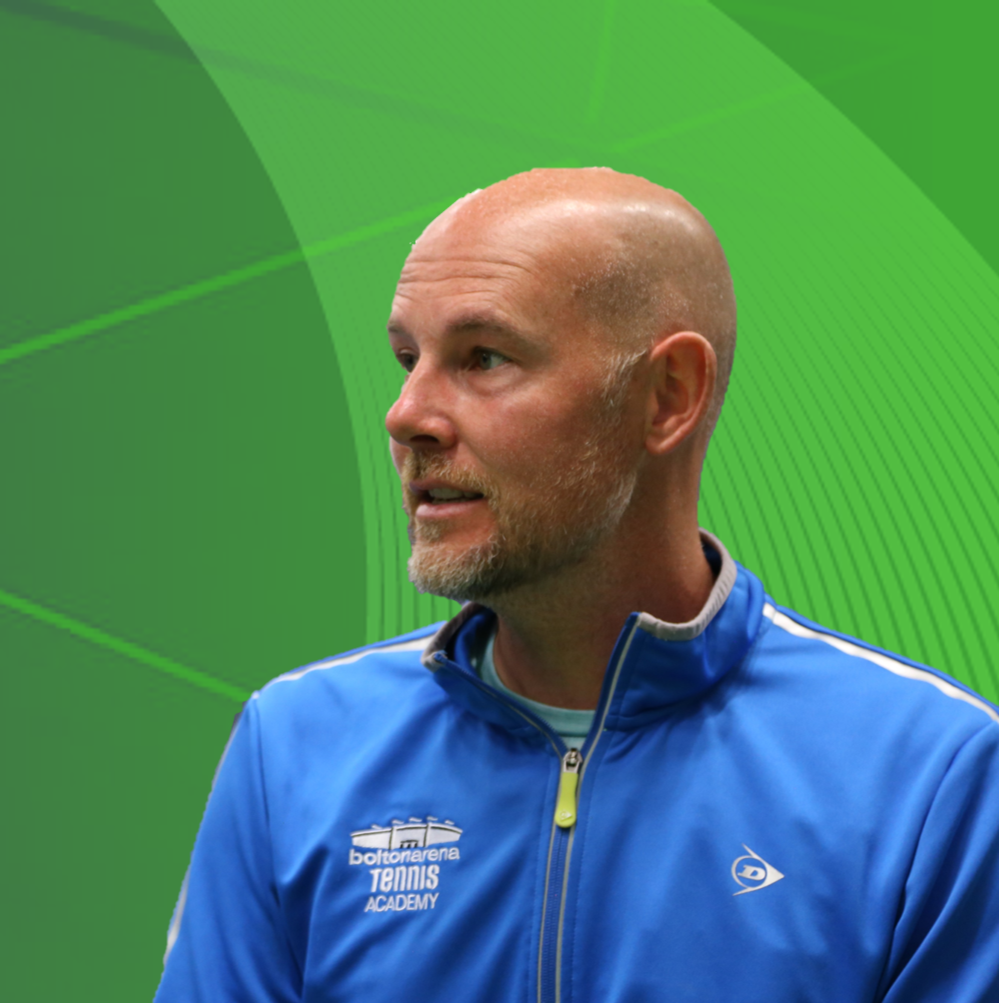 Steven has been involved with tennis for 30 years and his passion for performance tennis and helping players reach their potential is what drives him daily. Stevens vast experience has taken him around the world watching his players compete and build up an extensive network of world class coaches to learn and share ideas from.

Steven prides himself on building relationships with his players and parents and creates the trust required to embark on the long-term development of producing international level players. As a level 5 performance coach Steven has always looked to grow his own personal development and looks to mentor fellow coaches and see their progress.

As the Head Coach Steven sets a high bar for the team’s delivery and expects this from all the players on the Academy to fully engage with and respect. The long-term goal is to put Bolton Arena on the map in world tennis and create the infectious environment players of Pro Status want to be part of and help to inspire the next generation coming through our pathway. Over the 25 years of coaching Steven has produced many National and International winners and this still drives him day in day out. 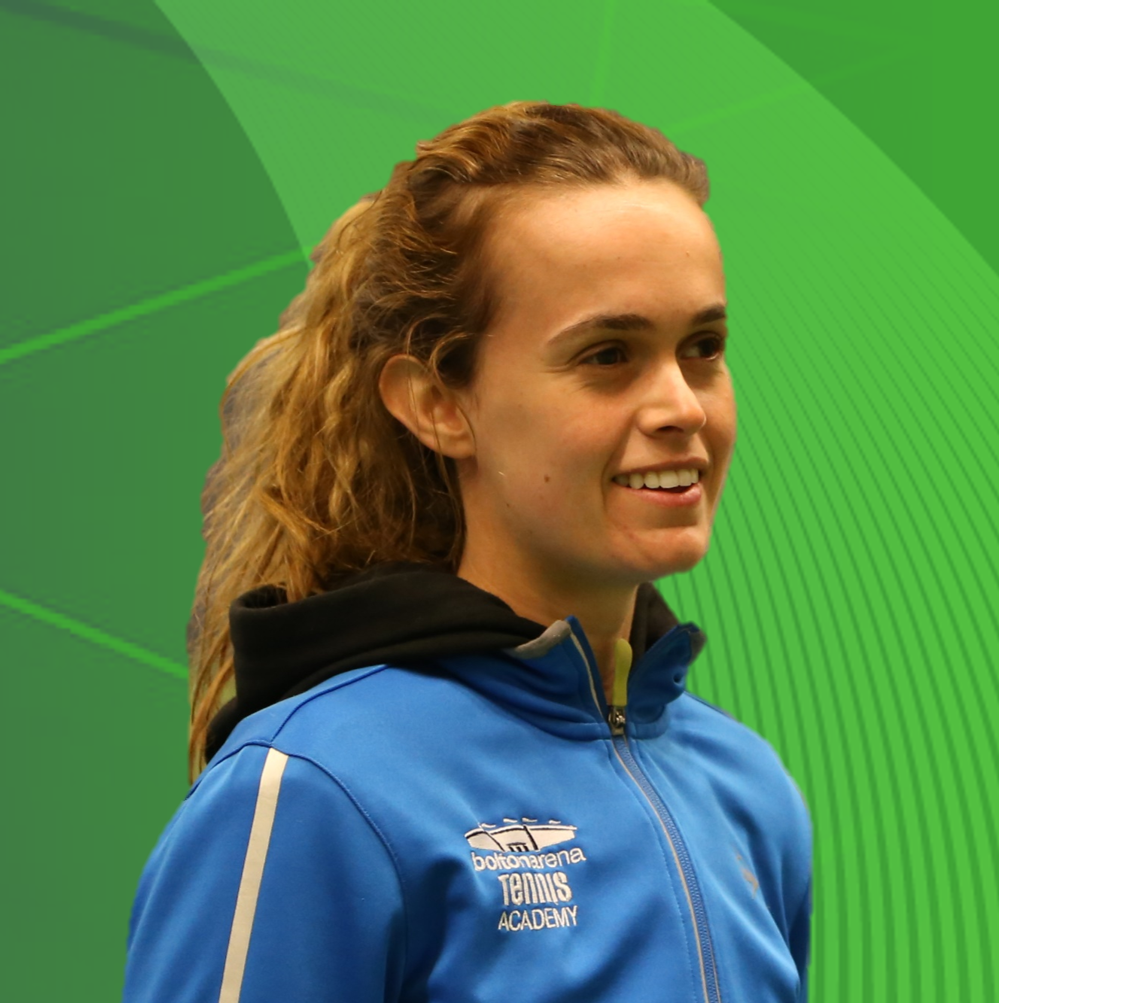 Sabrina has first-hand experience of the Academy, having trained at Bolton Arena as a performance player from aged 7 to 18. Throughout her time training here, Sabrina represented Great Britain on numerous occasions, achieving a national ranking of No.1 in Great Britain U16s.

On leaving Bolton Arena, Sabrina gained a scholarship at Texas Tech College in America, with the college ranked as high as 5th nationally, with a personal double ranking of No.8 nationally.

Sabrina is currently a Level 3 certified coach working primarily with our U12’s-U18’s, providing coach support on several LTA player tournaments and assisting with junior county cup teams. As a coach her philosophy is to help develop the person alongside the player. 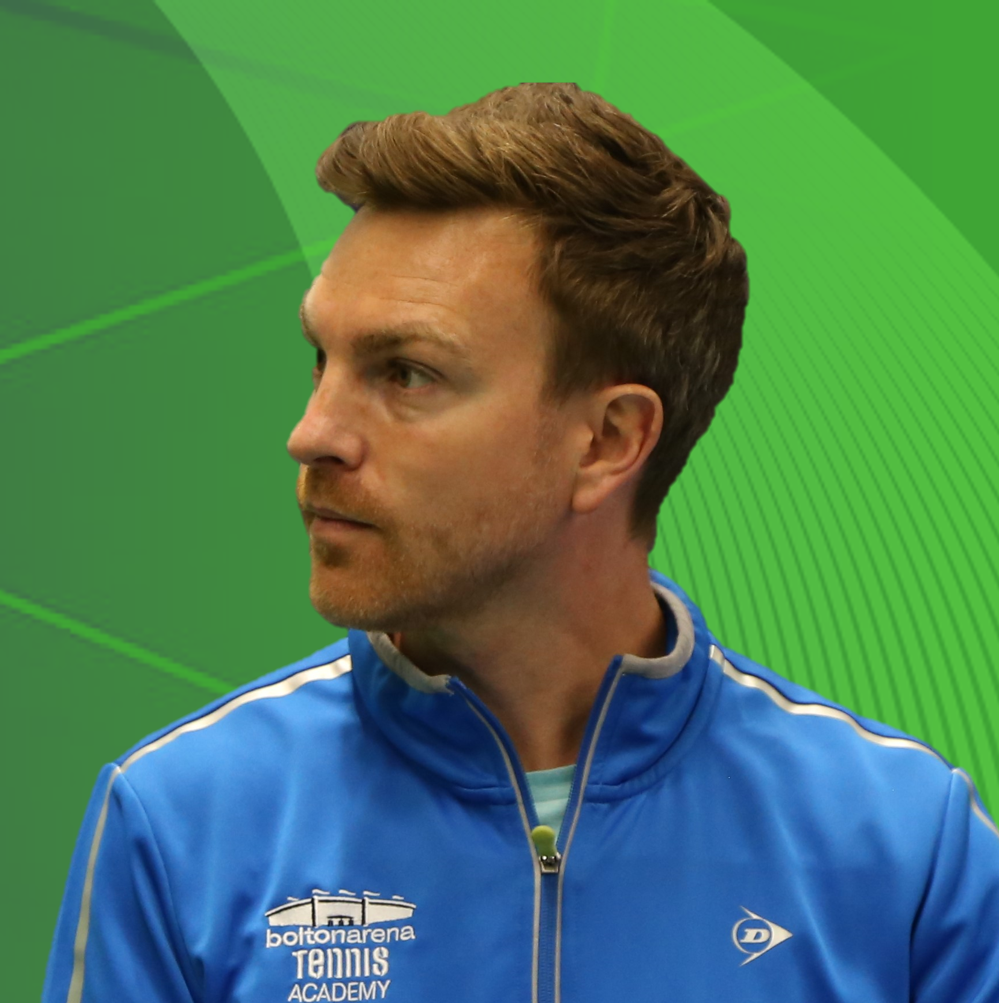 Howard is the Head of Sport Science, leading a multi-disciplinary team of strength and conditioning coaches, physiotherapists, as well as sports nutrition and psychology support.

Howard has been involved with the physical development team at Bolton since 2009. This experience includes working with players across various levels including, national and international juniors, ATP and WTA professionals including a former world number one. He is an Accredited Strength and Conditioning Coach, Certified Tennis Performance Specialist, and a Ba in Sports Coaching. Prior to coaching he served six years in the Royal Marines Commandos.

His philosophy is to use his professional knowledge and varied personal experience, to run a holistic tennis-athlete development program, with the main goals of reducing the risk of injury and improving on-court performance. He is also passionate about the development and education of coaches, having presented his training methodologies across the globe at coaching conferences. 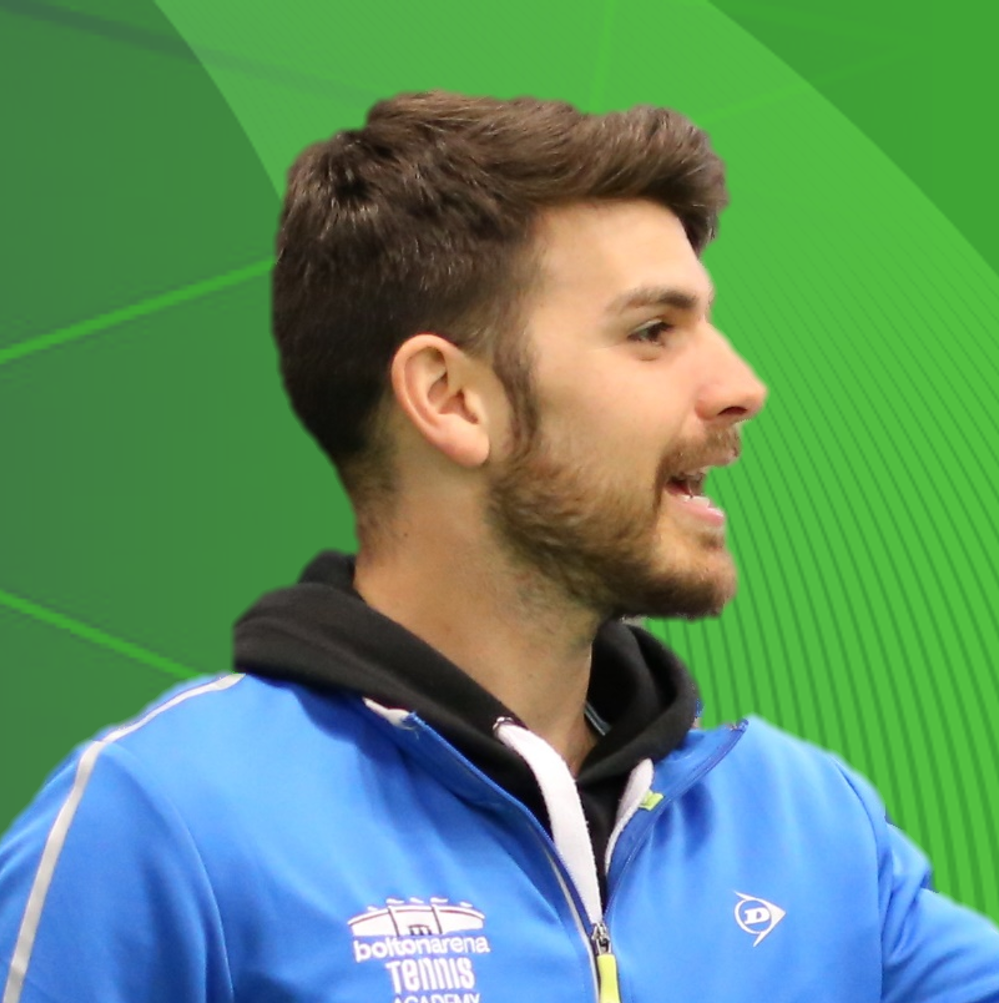 Simone started coaching in his native Italy, working with the top Junior ITF players within the country and with U12 &U14 Tennis Europe groups. After several years coaching in Italy, Simone moved to Spain, embarking on a new opportunity at one of the best academies in Europe, coaching several ATP players, whilst working alongside coaches with vast international experience.

Simone’s philosophy is focused on educating the players on all facets required to be a performance player, whilst also challenging each individual in every session to develop and enhance their overall ability. 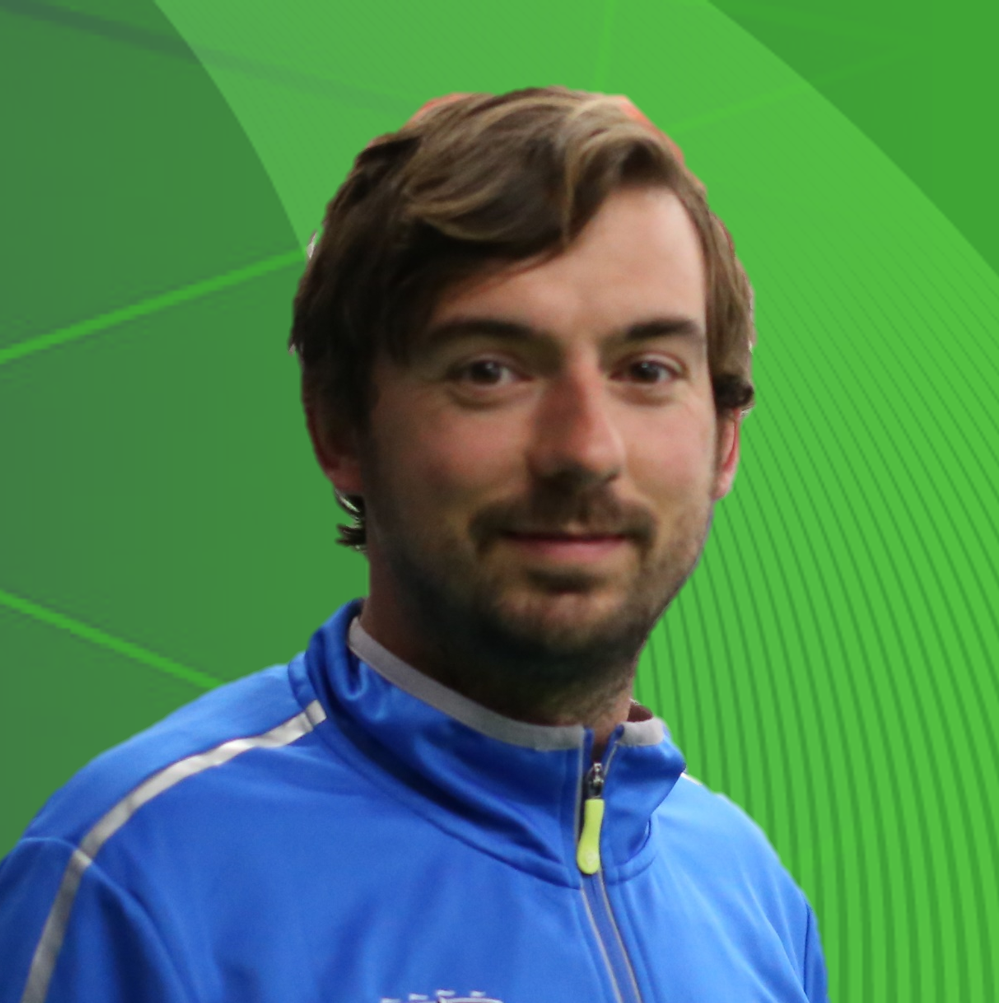 As a junior Simon played tennis to a high level, winning various national events from 12U to 16U; I also represented Great Britain at U12, U14 and U16. Before going into coaching, Simon attended Indiana State University where he studied Business and represented the University for Tennis. He has represented Derbyshire Men’s County for the past 20 years.

Simon has been coaching for 12 years in different performance environments including Loughborough University, Hills Road Cambridge, and David Lloyd Cheadle, where he ran the performance programme. Simon has coached international and national standard players, producing national champions in singles and doubles, with two players going on to represent Great Britain. In addition to his full-time coaching commitments, Simon has also been involved in Cheshire Tennis since 2011, captaining various age groups in this spell.

Simon is currently the Cheshire County Performance Coordinator. This role includes overseeing more than 100 players in County Training and helping player programmes to give the players the best chance of improving. 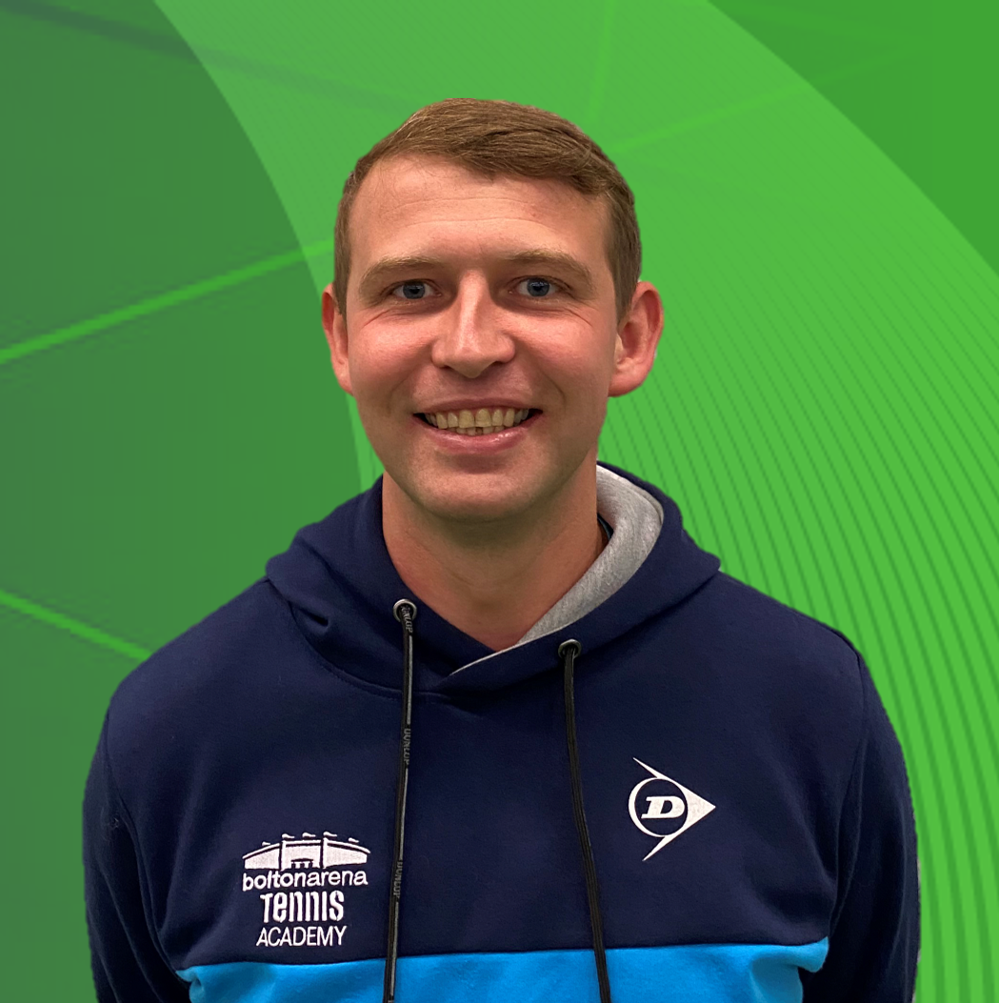 As a player, Dominic spent 5 years training at Bolton Arena on the performance programme, playing at a national level and also international level with a personal highlight of playing the Junior Orange Bowl.

Dominic has been coaching for 13 years and is now a Level 4 Performance Coach, whilst building up a wide range of experience working across different age groups and in different environments.

Prior to joining the coaching team at Bolton, Dominic was the u10 co-ordinator at Graves in Sheffield, which at the time was an LPDC.

Dominic loves working across all areas of the programme to help players achieve their goals and ambitions. 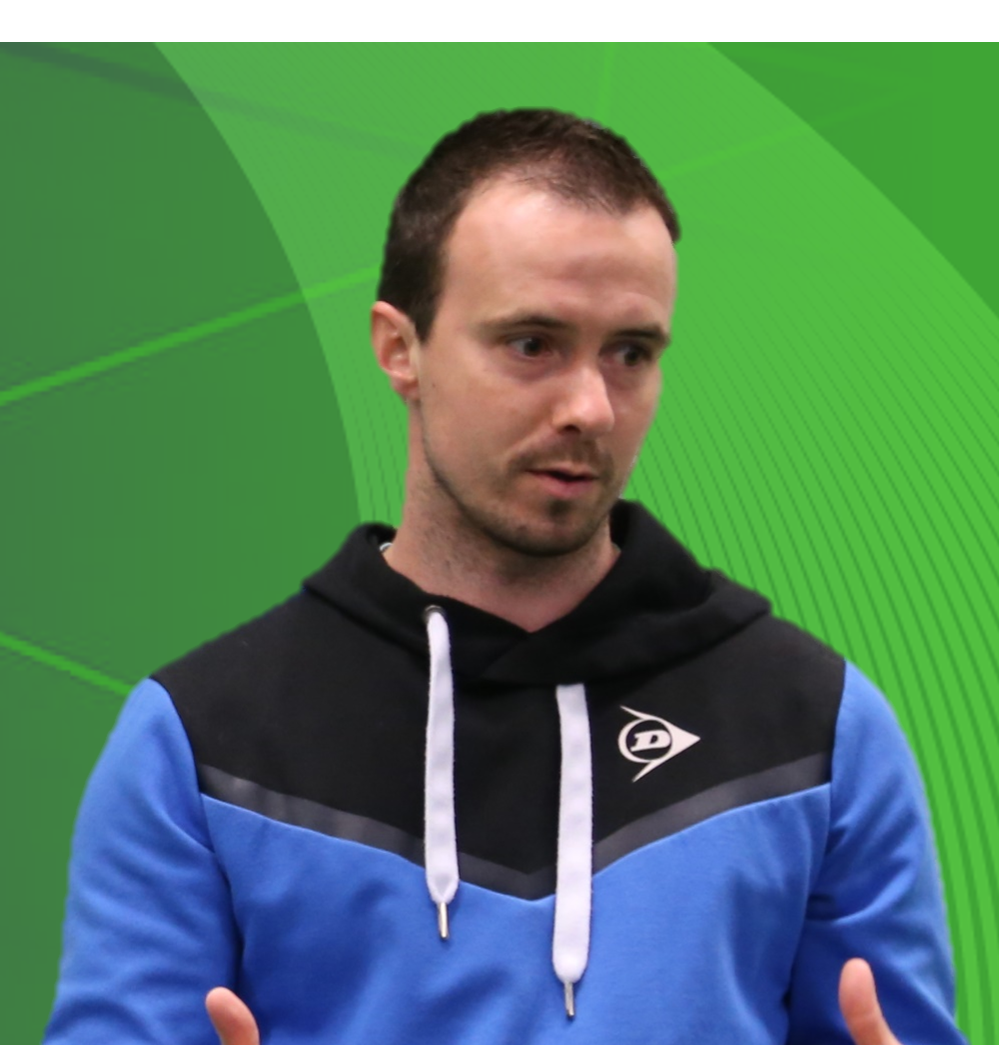 Jack has been a strength and conditioning coach for 10 years, with previous experience of athlete development at Blackburn Rovers and Liverpool FC.

He has worked with a number of athletes who have gone on to represent their country at youth and senior level, before playing their sport professionally in adulthood. 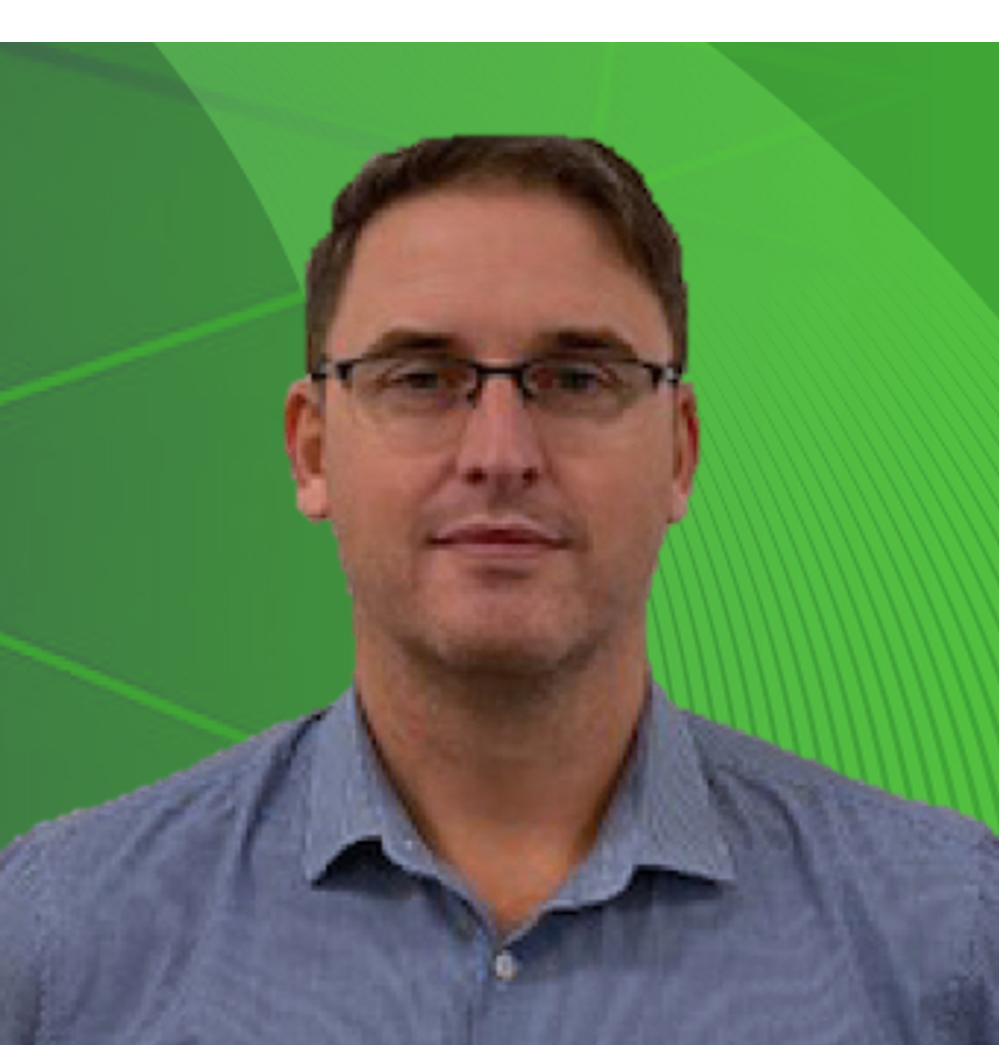 Stuart is the Head of Sports at Bolton Arena; responsible for multiple departments including Tennis, Gymnastics & Primary School Coaching. During his 15 years at the Arena, Stuart has helped to build and maintain a strong relationship with key partners such as the LTA and British Gymnastics. This has led to a thriving sports programme, delivering a range of multiple sports to over 1500 children each week.

With over 30 years of experience working in the Leisure Industry and as a strategic thinker, Stuart has developed and managed many successful projects including helping Bolton Arena to achieve becoming 1 of only 3 International High-Performance Centres in the UK.

In 2010, Stuart was recognised for his commitment to tennis, as he was included on the Spirit of Sport Statue after managing the winning team at the Greater Manchester Youth Games. 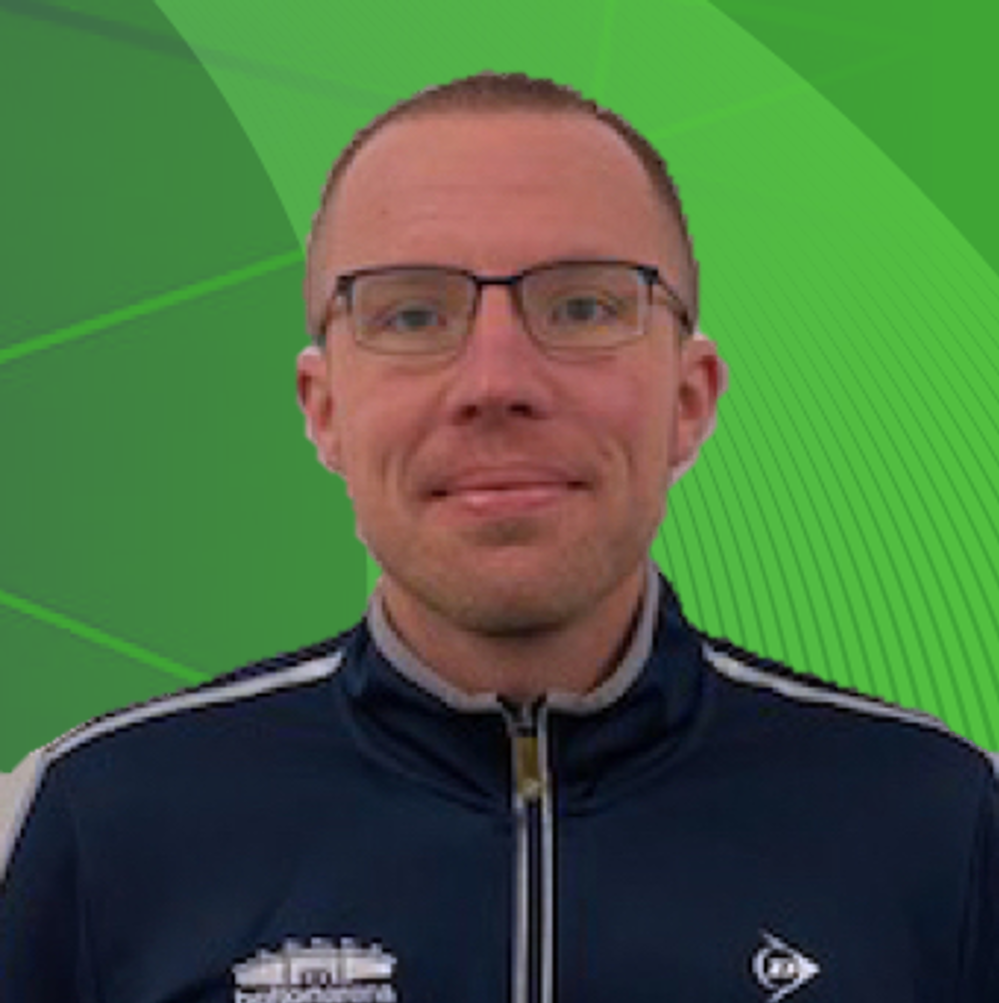 Wayne is the Tennis Co-ordinator at Bolton Arena and is responsible for the managing of the Mini Tennis and Development programme.

A very passionate coach, who has been coaching since 2004 and is vastly experienced in working with U10 players, Wayne has an excellent track record of transitioning players into the Regional Training programme and is also currently the U9 Lancashire County Coach.

Wayne is a Level 4 qualified coach, with a philosophy that focuses on engaging young players to love the game through fun and challenging sessions, as well as developing players technically and improving all round match play. He has a keen eye for spotting talent and supporting players to transition from school sessions through to our Junior Academy. 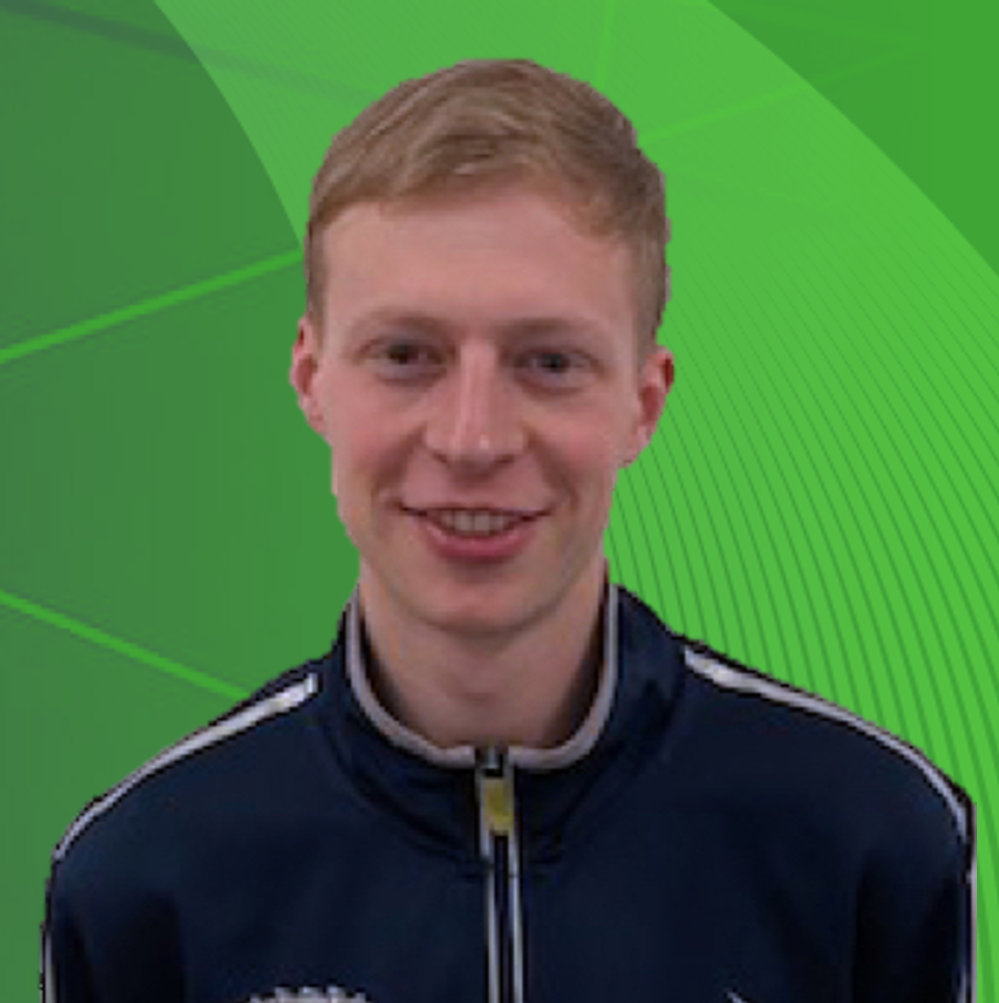 Jake works on the development programme, working through all the age groups ranging from tots to adults.

Jake has been coaching since 2011 and is a level 3 qualified coach. Alongside his work at Bolton Arena, he also assists on the U9’s Lancashire County squad.

He has a philosophy of working hard to engage, educate and deliver the best sessions possible to help players progress through the programme. 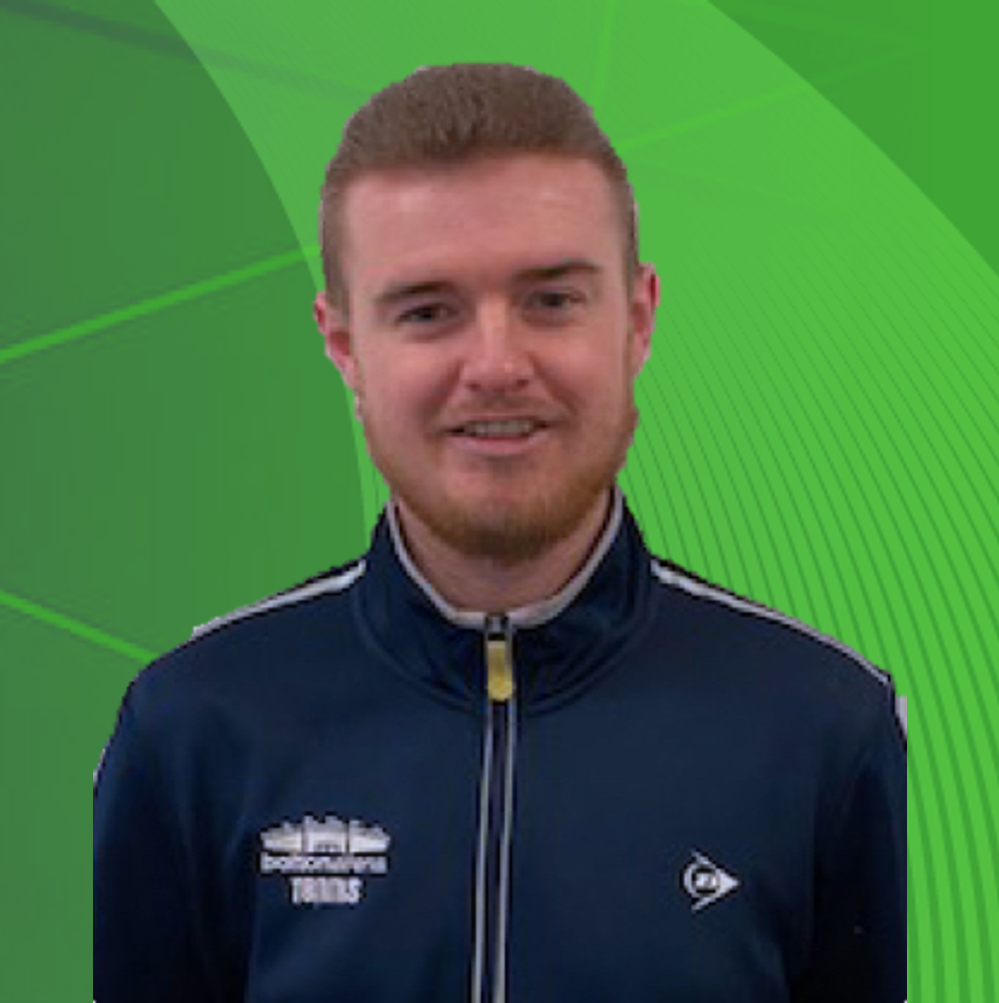 Tom is a member of the development coaching team, He is a Level 3 coach, who’s main roles are working across the programmes with players covering a range of ages and abilities.

Tom is a passionate and enthusiastic coach, who has been coaching since leaving college in 2015, he has great experience in introducing kids and adults to playing tennis. Tom also works on the schools out-reach and disability programmes. He is also qualified in coaching football and delivers on the Arena multi-sport camps.

Tom has a philosophy that focuses on engaging players of all abilities to love the game of tennis through fun and challenging sessions.